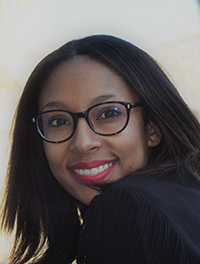 Head of Department
Department of Tourism and Cultural Heritage

Her field of expertise is mainly focused on the connections between heritage management and tourism policies in an interdisciplinary and comparative perspective. She has a deep knowledge of sociocultural challenges in SIDS (Small Island Developing States).

She holds a Master in Political Science (specialty in International Relations) from University Paris 1 Pantheon Sorbonne that she obtained in 2006. In 2007, she graduated from the University of Paris 3 Sorbonne Nouvelle where she did a Master in Cultural Mediation and was valedictorian. In 2011, she obtained her PhD in Social Anthropology from the Ecole des Hautes Etudes en Sciences Sociales EHESS, Paris.

She managed projects in France, in the United States, in the Caribbean, and in the Indian Ocean.

Since 2012, she is an associate researcher of the EIREST (Interdisciplinary Team of Research and Advanced Studies of Tourism) of the University Paris 1 Pantheon Sorbonne.

From 2013 to 2016, she worked as full time lecturer at the University of Mayotte where, among her academic responsibilities, she was in charge of a project funded by the European Commission (European Social Fund) and managed a team of nine employees.

As the Head of the Department of Tourism & Cultural Heritage of UniSey, she is in charge of the Master in Sustainable Tourism Management in partnership with IREST (Paris 1 Pantheon Sorbonne). She is managing an international team of local experts and French academics. In the same time, she is coordinating research and various international partnerships in the field of sustainable tourism.

She is also an international consultant specialized in providing technical guidance and strategic planning in Public Policy and Sustainable Development.