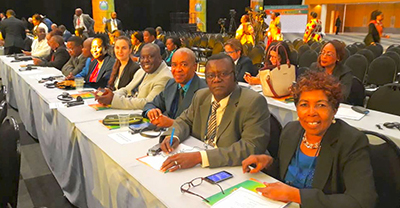 The Universal Peace Federation (UPF) and the Royal House of Mandela sponsored the Second Africa Summit which was organised in Cape Town, South Africa from the 21st to 24th November 2018.  The Summit, under the theme: “Peace and Human Development in Africa: Interdependence, Mutual Prosperity and Universal Values” was dedicated to Honouring the Legacy of President Nelson Mandela.  The Summit is one of a series of events which have been organised this year to commemorate the Nelson Mandela Centennial Celebration Year (1918-2018).

A highly selective group of delegates from throughout Africa and other parts of the world, including Seychelles, were invited to attend the Summit.   This included current and former heads of state, parliamentarians, leaders from the world’s great religions, traditional rulers, women leaders and representatives of the media, academia, business, arts, and civil society.

There is a growing awareness among people throughout the world of the urgent need for innovative vision and bold leadership if we are to resolve the critical issues of our time. These are two of the foremost qualities that our global icon represented and which we should emulate.  The aim of the Summit was to bring together leaders whose individual and collective experience, wisdom and insight are needed if we are to build a world of mutual understanding, sustainable peace and prosperity for all.  This Summit provided a platform for such an engagement and meeting of hearts and minds.

The event began with an opening banquet where the participants got the chance to meet Dr Thomas G. Walsh, the Chairman of UPF International; Chief ZMD Mandela, Member of the Pan African Parliament and the grandson of President Nelson Mandela; Dr Tageldin Hamad is Vice President of UPF International and Director of the UPF Office for UN and International Affairs; amongst others.

The Summit was held at the Cape Town International Convention Center and the UPF founder Dr. Hak Ja Han Moon delivered a welcoming address during the opening plenary.

The following sessions were held:

Session III: Assembly of the International Association of Parliamentarians for Peace (IAPP)

Session IV: Assembly of the Interreligious Association for Peace and Development (IAPD)

Session V: Assembly of the International Association of Tribal Chiefs

The Summit was concluded with the celebration of the Peace and Family Festival and Interfaith Peace Blessing honouring the legacy of President Mandela.

During their stay in Cape Town, the Seychelles delegation did not miss the opportunity to visit Robben Island: the unique symbol of “the triumph of the human spirit over adversity, suffering and injustice” with a rich 500-year-old multi-layered history, is visited every year by thousands of people eager to understand and honour the important aspects of South Africa’s history that the Island represents.

The visit represented a first-hand experience of the many things that have been heard and seen through photos and videos about President Nelson Mandela.  The visit began with a bus tour around the island and then a tour of the prison by Mr Dumisani Mwandla, an ex-political prisoner on Robben Island from 1989 to 1991.