The activities started with two peace marches at 9am, one in the north and one in the south of Mahé.  The programme in the north started with a march at Bel Ombre which went via St Louis and finished at the Peace Park in Victoria.  Over 150 people participated in the march which was followed by a show at the Peace Park.  The Peace Day message was read by Ms Kelsy Gill, a student who participated in the ‘Students on Ice Arctic Expedition 2019’ earlier this year.  This was followed by speeches, poems and a peace song by the youths.

Similar activities were also on the programme in the south.  At 9am, the Anse Aux Pins District Administrator kicked-off the march which saw the participation of around 150 people.  At various checkpoints along the way, groups of students read their messages of peace and climate action which they had written on recycled objects and pieces of used cardboard boxes.  Upon arrival at the University of Seychelles (UniSey) at Anse Royale, where the march ended, the participants took a group photo.  This was followed by a show whereby Ms Alichia Ernesta read the Peace Day message and the Chairperson of UPF-Seychelles delivered his welcome address.

In the show, there were: a sketch by secondary students; poems by primary students; a Peace Declaration Message which was read by a senior citizen.  The activities in the south ended with a song and dance performance by a group of youth who are also members of the Youth Peace Club which has been set up by the James R. Mancham Peace and Diplomacy Research Institute at UniSey.  The Chairperson of the International Day of Peace Committee, Ms Diana Benoit thanked everyone who had joined together to organise the event and all the participants for making a special effort to attend.

Before the participants went back to their respective district, a group of students planted some trees on the UniSey campus.  This was led by Mr Terence Vel, the University Centre for Environmental Education and the Wildlife Club of Seychelles.

The Committee had also organised a Climate Action Fair at the Peace Park in Victoria in collaboration with several Non-Governmental Organisations (NGOs) and entrepreneurs to create education and awareness.  People who visited the exhibits got the chance to broaden their knowledge on the subject of climate change through interactive quizzes and games.

The Committee is pleased that a little over 300 people participated in this year’s event and urges individuals and groups to continue spreading the word and taking actions to mitigate climate change and help save our planet. 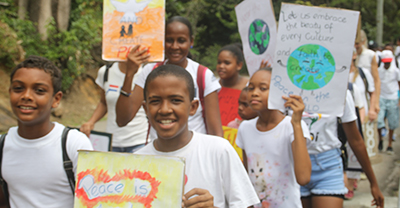