The prize giving ceremony for the UniSey’s Poetry Competition was held on Friday 3rd July 2020 in Theatre 2, Anse Royale campus.  It was organised to reward the winners of the poetry competition that took place in March this year which saw the participation of a few UniSey students and students from six Professional Centres: STA, SBSA, SIAD, SALS, SITE and NIHSS.  One student from Ecole Francaise also participated in the competition. In total, 51 poems were submitted and each participant could submit up to 3 poems. Even Mr. Mohamed Kante from SALS encouraged his students to also participate by submitting one poem. The organisers were satisfied with the number of poems received and was very impressed with some entries.

Present at the ceremony were the Vice-Chancellor of the University, Dr. Justin Valentin, Dean of Faculty of Arts and Social Development, Ms. Joelle Perreau, Head of Languages and Media Department, Mrs. Annie Laurette and 5 of the 6 winners : Stephen Figareau from STA, Selly Robert from SIAD, Shanah Jouaneau from SITE, Elia Savy from Ecole Française and Jayden Damien Noel from SALS. Representatives from the different institutions, members of the jury, director of l’Alliance française and members of Bling Bling poetry Association were also present. 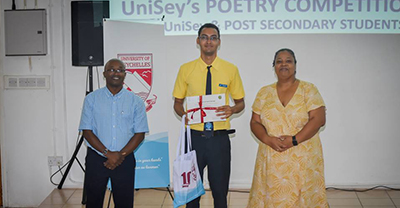 The organisers were pleased with the outcome of the competition and wish to thank everyone who played a role in making this event a successful one. The possibility of making it an annual event on the UniSey calendar is being considered.