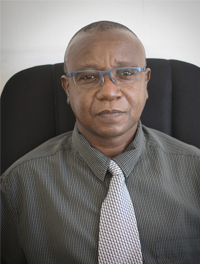 Bernard Songwar joined UniSey in 2011 and currently teaches courses at the India-Seychelles Centre for Excellence at the Mont Fleuri campus.

After leaving school, he obtained a Diploma in Education at the School of Community Studies. In due course, he followed his new interest in computing and in due course obtained professional certificates in specific applications before being recognised as Cisco Certified Networking Associate Instructor. For the latter he studied with the University of Mauritius. His next step was to spend a year in India, at the CDAC Centre for Development and Advanced Computing at Pune, where he was awarded a Postgraduate Diploma in IT Infrastructure, Systems and Security.

Bernard’s career reflects his initial commitment to school-teaching as he spent the first fourteen years after his training, working in different roles in local schools. In 2004 he was Head Teacher of Glacis Primary School. After that, the focus switched to computing, starting as an Analyst Programmer and computing tutor, progressing from the former to System Analyst and Cisco CCNA Instructor, prior to his present role with UniSey.

He is determined to go further, with a particular desire to specialise in Cyber Security. Even outside his mainstream work commitments, Bernard enjoys teaching others and exploring new aspects of technology. He also finds time to listen to music, jog, read and cook.